Having the chance to work on a project that calls upon skills not normally associated with our core skills was an exciting prospect. But we’re not one to shy away from a challenge.

The client wanted a way of taking 360 degree images. The problem wasn’t really the technical ability of taking these pictures, it was the post-processing needed to stitch the images together, plus the complex software needed to view them. They needed a simpler way of taking and processing the images. If possible, a single picture would be preferable.

What we needed to do is find out exactly what the images were going to be used for. After talking to the main consumers we found out they wanted to take pictures of the areas around lighting fixtures, and link them to locations on digital maps. Google Street View was reasonable, but it wasn’t good enough to provide the details needed for renovation projects and future upgrades. Therefore, taking a 360 degree image which is up to date would save a lot of time.

We looked at what they used currently, which was quite primitive. Images taken on many different devices were fed into a complex piece of software. An operator manipulated the images to line them up into a long strip, then processed them into software that then allowed rotation of the image. The process was long-winded and resulted in poor quality. Some techniques involved someone standing with a mobile phone and rotating slowly, with the camera taking multiple shots. However, if the camera is set up for automated exposure, the different quality of each image and lighting changed at each angle, made the resulting image hard to use.

We decided to scrap the existing devices, process, and software. Instead, looking at the latest technology on offer. As the need was to take a single image, we ruled out complex technology such as rotating gimbals, multi-camera systems, and trying to take multiple images on one camera.

The marketplace for these types of equipment is a little sparse, but we did find an interesting lens. There were two options. One for a DSLR camera and one for a mobile phone. It had a parabolic mirror on top of a lens adaptor, and took a single, donut-shaped image: 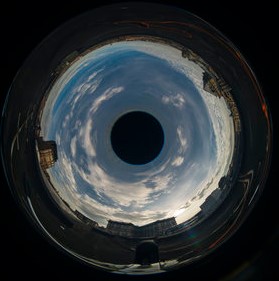 This enabled a single shot to be made to capture a single image. As the camera took a single image, this removed the exposure and usability problems immediately. It did require a high-resolution camera, such as a 20MP DSLR to get good quality, but the organisation already had these to hand.

The single image could be ingested into their image library much easier than multiple, or stitched images. All geolocation data is preserved, making it easier for import into the mapping system. The processing software was very cost-effective too. It processed the image into an HTML5 file, meaning it can be viewed on any browser, rather than needing specialised software on each client.

Operating the camera with the lens was simple. It can be mounted on a standard camera tripod and the image taken using a timer (to get the operator out of the shot) or remotely using a wireless bulb.

Extensive testing was performed on the equipment and the images. The software was simple to use and could be operated with minimal training. It proved a great hit.

Simplicity of operation of the equipment and software made the solution more pleasurable to use.

Because the image produced was a standard JPG and RAW files (from the DSLR) it was managed with no problem into the library.

We were able to retain the geolocation, date, time, and camera details in the original image, this was used to index and organise the images.

The DSLRs could certify the images, meaning the images were guaranteed to have originated from authorised cameras.

Simpler and more cost effective software vastly reduced the complexity and cost of the processing suite.

The processing suite can have multiple client processing images, and as it only takes seconds to process, can process hundreds of images a day.

Images can be taken from multiple devices, and processed as they are required.

We are an independent consultancy geared up to help both public and private organisations realise their strategies.